Today, I want to discuss the dreaded topic of taxes. Before I get started, let’s turn to super-investor Warren Buffett. His net worth now surpasses $100 billion, so it stands to reason that his pronouncements are worth heeding.

Buffett once said: “I have worked with investors for 60 years and I have yet to see anyone, not even when capital gains rates were 39.9 percent in 1976-77, shy away from a sensible investment because of the tax rate on the potential gain.”

As President Biden unveils new plans to raise taxes, a lot of partisans are cranking out the usual falsehoods about tax policy. These talking points are as predictable as they are tiresome. Below are the facts that every investor needs to know.

Despite what you may be hearing in the cable TV fever swamps, there’s zero empirical proof that a modest hike in tax rates always undercuts stock market returns.

In the 1950s, when pro-business Republican Dwight Eisenhower was in the White House, incomes in the top bracket faced a marginal tax rate of 91% (that’s not a typo; it was 91%), while taxes on corporate profits were twice as high, relative to national income, as in recent years (see chart). 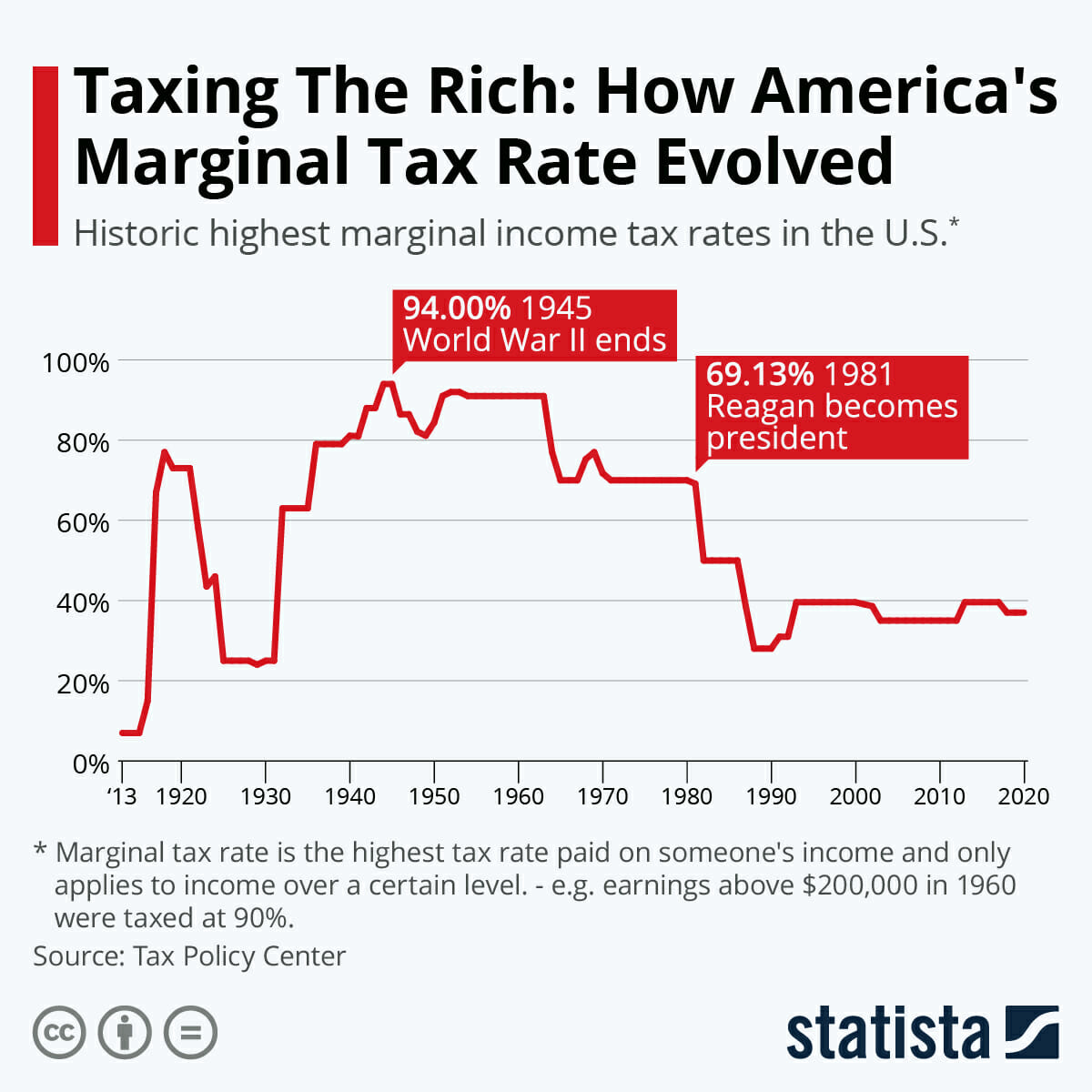 This high-tax era from 1950 to 1970 experienced stupendous, broad-based growth. Median family incomes doubled, the economy soared, and the stock market thrived. Taxes were high and yet it was a Golden Era for American prosperity. Spending on infrastructure and science gave us the Interstate Highway System and put a man on the moon.

The last time tax rates were raised significantly was in 1993, during the Clinton administration. Stocks followed the increase by staging one of their longest-lived and most robust bull markets in history.

Conversely, there’s no hard data that tax cuts always fuel growth, even though that equation has become an article of faith among some people that’s akin to a religion.

President Ronald Reagan’s 1981 tax cuts did precede a strong rally for stocks in the 1980s. However, stocks were underwater at the end of both of President George W. Bush’s two terms in office, despite his administration’s implementation of extremely generous tax cuts. Likewise, President Trump’s 2017 tax cuts didn’t provide the promised “rocket fuel” for job growth and productivity.

Don’t misunderstand me: I’m not advocating for higher taxes. Like any sane person, I hate paying taxes. I’m merely pointing out that tax rates represent only one variable among many that determine how stocks perform and the level of wealth they generate for investors. There’s no reason to dump intrinsically sound stocks, simply because the fear-mongers are regurgitating the same old canards about taxes.

According to a report published on April 22 by the brokerage firm LPL Financial, the S&P 500 has increased an average 1.4% in the three months before the capital gains tax has been increased, dating back to 1969. Over the next three-month, six-month, and 12-month periods following a hike in capital gains tax since 1969, the S&P 500 gained an average of 6.4%, 2.1%, and 4.3%, respectively.

Throughout market history, not a single bear market was triggered by raising taxes on either corporations or individuals.

It’s revealing that after an initial one-day swoon, the stock market shrugged off the announcement of Biden’s tax proposals and resumed climbing. The smart money on Wall Street knows that these modest tax proposals won’t derail the stock market’s upward trajectory. What’s more, Biden’s proposals are likely to get watered down in the 50-50 Senate.

There are many legitimate reasons to oppose these proposals if you belong to the low taxes/small government school of thought. But whether you love them or hate them, the fact is, these proposals are unlikely to lead to a large-scale sell-off of stocks. 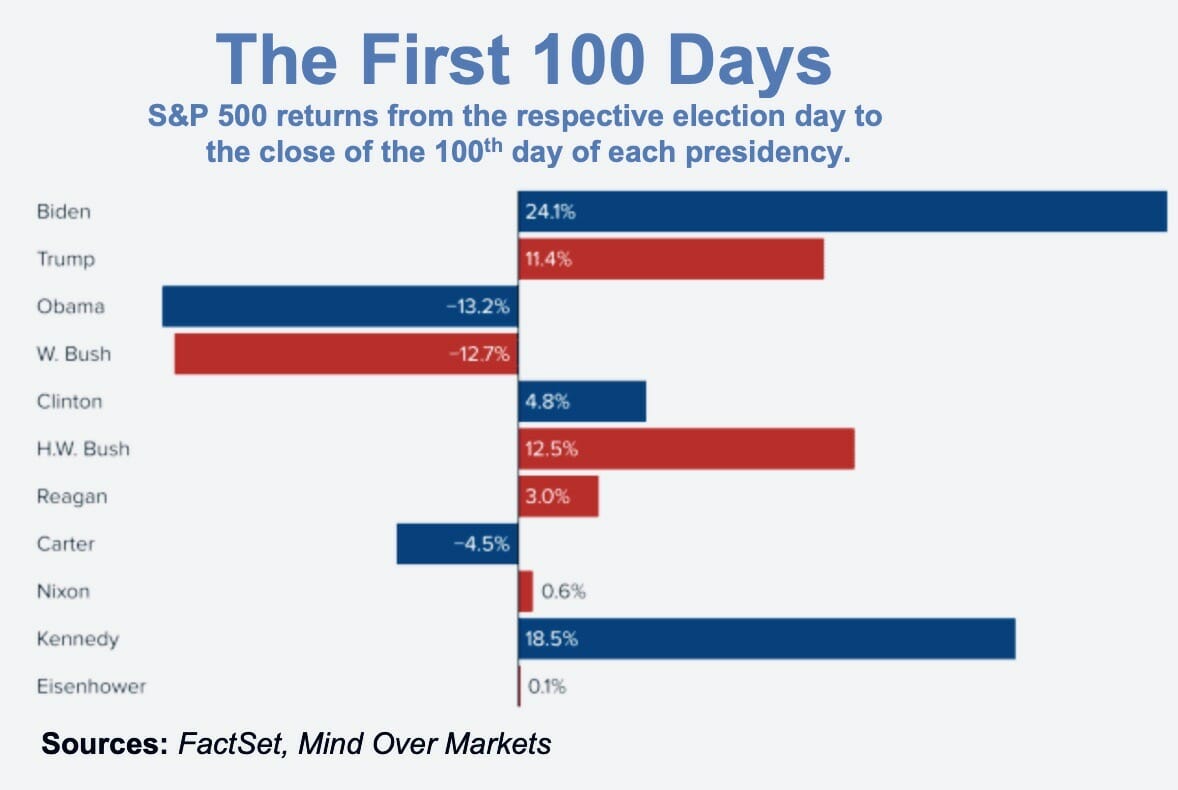 The performance of the S&P 500 during the first 100 days of Biden’s presidency outpaces comparable periods going all the way back to the “Nifty Fifties.” In a sharply divided Senate where conservatives hold sway, any proposal that’s deeply inimical to the investor class is dead on arrival. The financial community, which donates lavishly to both political parties, is savvy enough to know this.

Called The American Families Plan, the Biden tax blueprint seeks to fund spending on childcare and education, among other goals. The spending would be offset by nearly doubling the capital gains tax for people earning more than $1 million annually while the top marginal tax rate would get boosted from 37% to 39.6%.

About three out of every four U.S. stock investors wouldn’t be subject to an increase in the capital gains tax rate, according to a UBS research note. That’s because they bought stock in 401k plans, Individual Retirement Accounts (IRAs) and other types of accounts not subject to the tax. Biden’s proposal to raise the top federal tax rate on long-term capital gains to 39.6% from 20% would hit taxpayers whose income exceeds $1 million each year, which currently represents 0.3% of the roughly 154 million people who file a tax return every year.

If I had my druthers, tax rates would remain lower rather than higher, particularly when it comes to levies on dividends. But neither does it make any sense to abandon positions in quality stocks, just because investment tax rates are likely to rise. Stick to the fundamentals and stay invested.

Doubtless you’ll hear counterarguments to everything I’ve written here. And I certainly don’t expect anyone to be happy paying a higher tax rate. But there are plenty of time-proven tax-reduction strategies to help investors of all types. The analysts at Investing Daily continually provide money-saving tax advice for readers.

It’s a company’s growth that ultimately determines your returns. Improving your tax efficiency to minimize your burdens and keep your capital working for you will improve those returns. But you can’t grow your wealth unless you focus on underlying businesses first. And remember: Sooner or later, any money that flees the stock market for fear of higher taxes will have to come back.

The lower the tax rate is, the better, of course, but buying an investment solely or even mainly because fewer taxes are due is always a prescription for mediocre returns, if not outright disaster.