Water: The Most Precious Commodity of All

You should invest in the most precious commodity on the planet. It isn’t oil, nor gold. I’m referring to water, the essence of life.

A news story caught my eye that underscores the growing global demand for potable water. On April 23, California’s State Water Resources Control Board issued a draft Cease and Desist order against Nestlé (OTC: NSRGY), demanding that the international consumer food and beverage giant stop pumping millions of gallons of water from the San Bernardino National Forest, which the Swiss-based company then sells as bottled water under its Arrowhead brand.

The California order reflects a years-long fight between Nestlé and environmentalists who say the company has been expropriating water from Strawberry Creek for nearly nothing under an expired permit.

As the battle between Nestlé and California regulators rages on, it’s a reminder that the big resource battle of the coming decades will be over water. As I explain below, the looming “Water Wars” spell massive investment opportunities. First, let’s do the numbers.

Societies around the world are increasingly bedeviled by a global water crisis, spawned by climate change, worsening pollution, overpopulation, poor agricultural practices, and the woefully inadequate funding of environmental agencies. Unsafe water sources are responsible for 1.2 million deaths around the world each year.

According to recent studies by the scientific journal Nature, the world’s stores of groundwater, which accumulate over millennia in aquifers, are vanishing at an alarming rate. The result is persistent demand for reliable sources of clean, potable water. 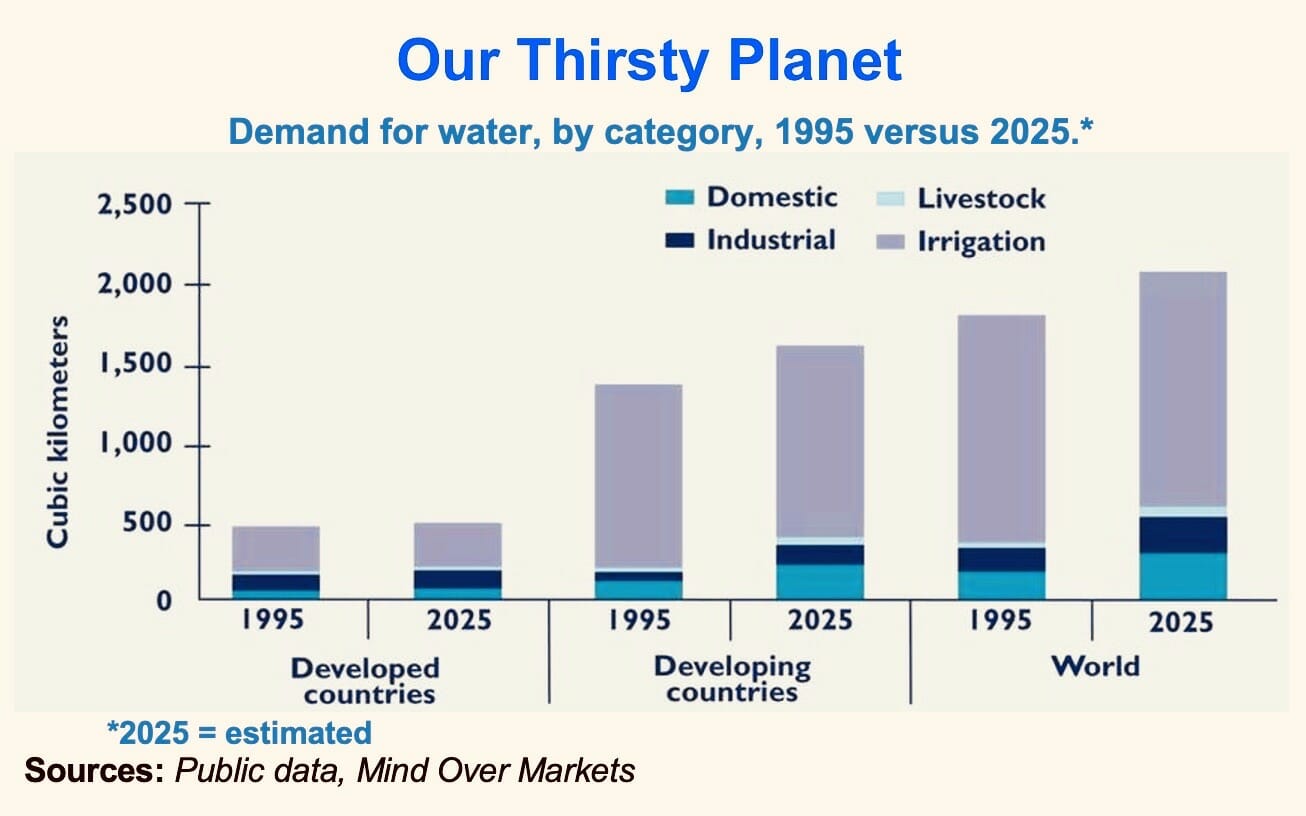 Human beings will continue to need water, regardless of the cyclical gyrations of the stock market and economy. Water-related investments are recession-proof and should weather any sell-offs that await ahead.

For evidence that the need for clean water represents a long-term investment trend, look to Saudi Arabia.

The desert kingdom recently launched a sweeping strategy to modernize and diversify its economy. By 2030, the Saudis expect non-oil government revenue to increase six fold. Among these initiatives is a huge investment in water purification, production, storage, and distribution.

When a powerful oil-dependent nation such as Saudi Arabia stakes its future on the clean water industry, you should sit up and take notice. The time to jump aboard this moneymaking theme is now, before the rest of the investment crowd catches on and water plays get too pricey.

As underscored by the lingering contamination crisis that afflicts the drinking water supply in Flint, Michigan, America’s water infrastructure badly needs upgrading to bring it up to standards.