Thirteen months ago, I named Netflix (NSDQ: NFLX) as a stock to own while “The Remote Economy Takes Off.” The overall stock market was plunging in the wake of the coronavirus pandemic. Most businesses either shut down or drastically reduced their operations.

However, a small subset of companies saw their fortunes rise as consumers rapidly adapted to all forms of online commerce. On the day that article was published, NFLX closed near $336. Four months later, it peaked above $555. That works out to a gain of nearly 60% in just four months. 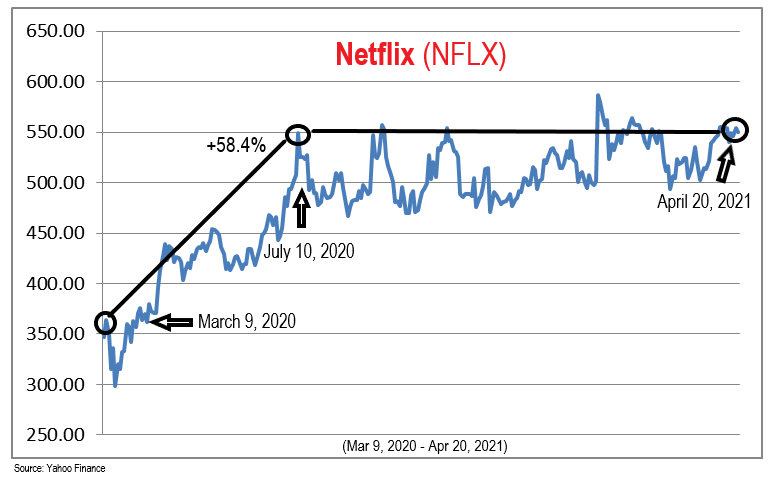 At that time, companies that benefitted from the pandemic were considered the only safe bets on Wall Street. People were stuck at home. Binge-watching Netflix original programming such as “The Queen’s Gambit” was all the rage.

All that changed when several successful COVID-19 vaccine candidates were announced last November. Suddenly, many of those safe bets began to look risky due to their high multiples to sales and earnings.

Earlier this year, I commented on the rotation out of momentum stocks while “The Remote Economy Slows Down.” As I noted then, “Wall Street tends to overreact to current trends by extrapolating them too far into the future.”

It appears that Netflix is now suffering from the same flawed logic that drove it higher a year ago. Last Tuesday, the company released its Fiscal 2021 Q1 results that disappointed the market. Netflix added 3.98 million new subscribers during the quarter, far below the estimate of 6.29 million.

The next day, NFLX fell more than 7% as nervous shareholders bailed out of the stock. It would appear that Wall Street isn’t sure what to make of Netflix anymore.

Despite its recent drop, Netflix still isn’t cheap. At a share price of $510, NFLX is valued at 55 times forward earnings. That is about twice the multiple for the S&P 500 Index.

The uncertainty regarding its future growth prospects is reflected in the options market. Last week while NFLX was trading near $510, the call option that expires on July 16 at the $520 strike price could be bought for $28. A call option increases in value when the price of the underlying security goes up.

At the same time, the put option that expires on the same date at the $500 strike price could be bought for $26. A put option increases in value when the price of the underlying security goes down.

For that trade to be profitable, NFLX would have to drop below $474 by the expiration date. The last time Netflix traded that low was June 30. If that were to happen, NFLX would have gone nowhere in over a year.

I don’t think either of those scenarios is likely, which is why I believe selling both the call and put option on NFLX might make sense. That type of options trade is known as a “short straddle.”

In this case, selling both the call and put option would result in immediate income of $54 per share, or $5,400 per contract (one contract is for 100 shares). If NFLX stays between $474 and $548 until those options expire then you get to keep all of that money.

The risk to this strategy is that NFLX may rise above $548 or sink below $474 within the next 90 days. In that case, your profit would be decreased by the extent to which NFLX moves beyond those parameters. For this trade to result in a net loss, NFLX would have to soar above $574 or fall below $444.

If that is too risky for you, consider just writing a covered call option instead. In the example above, the $28 options premium equates to an options premium yield of 5.5%, or 22% on an annualized basis.

Read this if you've ever lost money trading options [sponsor]

Does everything seem to go wrong right after you place an options trade? You watch the stock and everything is going right.

Then you open the trade... and within an hour, you've lost money. It's not your fault. You just simply weren't given the "behind the scenes" knowledge every options professional knows. The road to success for your first big, triple-digit options win is simple. Have a checklist for every trade so you don't repeat rookie mistakes. For the first time ever, after 20 years, I'm releasing my own personal options trading checklist for no charge. Click here to get the checklist and stop losing money right now.