The Stuff Investors' Dreams Are Made Of

Not all growth stocks are involved in cutting-edge technology. In fact, some of them sell products that are so mundane that we take them for granted.

Want proof? Consider the performance of Sleep Number (NSDQ: SNBR) over the past 12 months. Since bottoming out below $16 a year ago, SNBR has gained more than 800%. 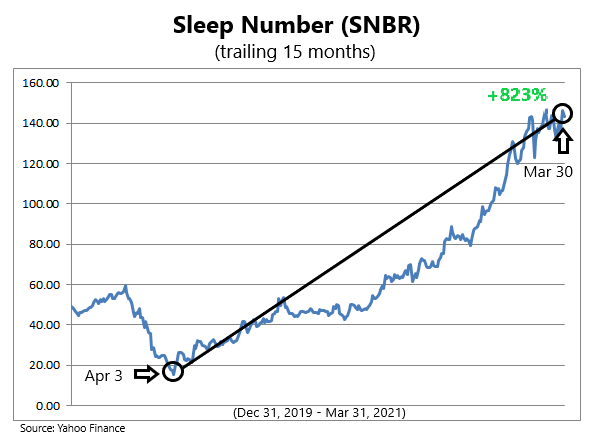 That blows away the impressive gains posted by the “FAANG” quintet of Facebook (NSDQ: FB), Amazon.com (NSDQ: AMZN), Apple (NSDQ: AAPL), Netflix (NSDQ: NFLX), and Alphabet (NSDQ: GOOGL). Three of those stocks doubled during the past year, while the other two gained 50%.

SNBR has even appreciated more than Tesla (NSDQ: TSLA), which is up 635% over the same span. You would be hard-pressed to find a stock that has performed better than SNBR during the past year.

As you may know from its ads, Sleep Number makes beds. But that’s not how the company sees it. It adheres to a “mission of improving lives by individualizing sleep experiences.”

The company claims that it has “improved more than 13 million lives as we strive to advance society’s wellbeing through higher quality sleep.” That’s a lofty goal, but there is actually some science behind it.

According to the American Psychological Association, getting an extra 60 – 90 minutes of sleep each night would improve memory, increase resistance to disease, and reduce the risk of being killed in an accident.

Millions of Americans suffer from chronic pain, emotional distress, or physical discomfort that makes it hard to sleep. They know it, but until recently could not afford to do anything about it.

Talking in Your Sleep

Sleep Number is one of the unexpected beneficiaries of the coronavirus pandemic. Severe quarantine restrictions made it difficult to spend outside the house. As a result, many people upgraded their home living conditions instead.

Paying $1,500 for a bed is considerably less expensive than spending two or three times that amount on a week at the beach. Folks that received a federal stimulus check that didn’t need it to pay the bills could rationalize the purchase as being paid for with “free money.”

It appears that a lot of people had the same idea. Last year, Sleep Number recorded a 48% jump in operating cash flow while increasing fully diluted earnings per share (EPS) by 81%.

The company is guiding for EPS of at least $6.00 this year. That works out to a gain of 30% over last year after adjusting for an extra week of sales in 2020.

Driving that growth is the 360 Smart Bed. In addition to the usual hardware of a bed frame and mattress, the 360 Smart Bed uses software to communicate with a smartphone app that monitors sleep habits.

That makes Sleep Number a play on the “Internet of Things” (IoT). Your bed is no longer just a place to slumber. It is also a device that collects information about your personal habits and synthesizes that data to help you sleep better.

In that regard, perhaps Sleep Number really is a tech company after all. It’s not the bed that makes it special. It’s the way the bed is used to improve your life, which ultimately is the objective of all technologies.

That being the case, Sleep Number’s forward price-to-earnings ratio (FPER) of 24 is not excessive. That is slightly more than the FPER of 22 for the S&P 500 Index but less than the multiple of 28 for the tech-heavy NASDAQ 100 Index.

The eight Wall Street analysts that follow Sleep Number aren’t sure what to make of the company’s prospects. Five of them have it rated as ‘hold’ or ‘underperform’, while only three advise buying it at its current share price.

Their average one-year price target of $131.75 is $10 below where the stock was trading last week. Apparently, the majority of them believe that SNBR is overvalued and likely to depreciate over the remainder of this year.

That lack of confidence in the stock has caught the attention of short-sellers. The number of shares sold short as a percentage of the float was 18.7% on March 15. A short interest above 20% of the float is considered very high.

The question for shareholders and short-sellers of Sleep Number is this: Was 2020 a pandemic-induced aberration or did it accelerate a trend that was already in place? The answer to that question will determine if 2021 will be a dream come true or a nightmare for one of the past year’s best-performing stocks.