Since the start of this year, Volkswagen (OTC: VWAGY) has shot up in value. The big jump is not the result of takeover rumors or some sort of weird Bitcoin (BTC) play.

Instead, Volkswagen’s full embrace of the electric vehicle (EV) market is driving the stock higher. Last week, the company said that it will deliver one million EVs this year. Further, it intends “to be the global market leader for electric mobility by 2025 at the latest.”

That news must have come as a shock to Tesla (NSDQ: TSLA). Last year, Tesla delivered half a million EVs. Like Volkswagen, Tesla intends to deliver one million EVs in 2021.

Based on the stock market’s initial reaction to this news, it appears Volkswagen has the upper hand. While TSLA has lost ground this year, VWAGY has more than doubled in price. 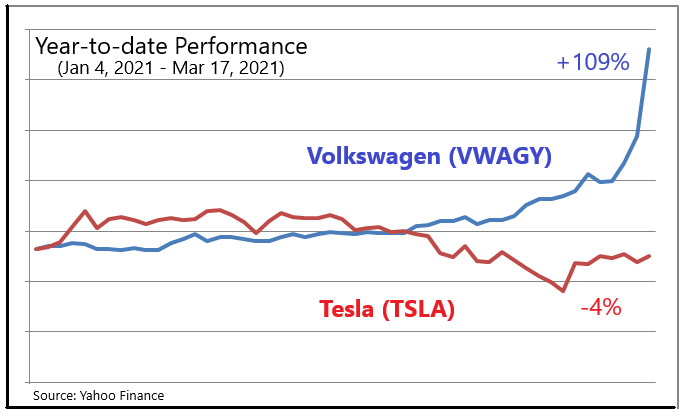 The stock market has been looking for a reasonably priced way to participate in the EV market. Chinese EV maker Nio (NYSE: NIO) gained 2,000% over the past year despite being unprofitable, so it’s no bargain, either.

Now that Volkswagen is going all-in on electric vehicles, the stock market will judge it by an entirely different set of standards. Of course, it’s one thing to say you will do something and something else altogether to actually do it.

Volkswagen is expecting investors to trust it to keep its word. In that regard, the company is hoping everyone has forgotten about the scandal that almost brought the company down six years ago.

I wrote about the Volkswagen scandal when the story broke in September 2015. It saddened me to see the esteemed automaker embroiled in such an unseemly affair.

At the time, it was difficult to gauge the long-term impact that episode would have on the stock. After peaking above $26 in March 2015, VWAGY fell below $12 seven months later.

Six months ago, VWAGY was struggling to break above $16. That’s the same price it was trading at 14 years ago!

Meanwhile, EV stocks were going through the roof. All of the “big three” U.S. automakers were introducing battery-powered versions of some of their most popular models. The writing was on the wall.

For Volkswagen, making a full commitment to EVs was a no-brainer. It has the engineering expertise and manufacturing resources to successfully pull it off. And most importantly, it would change the conversation about what the company stands for.

By announcing this decision now, Volkswagen immediately put the sordid affair from 2015 behind it. At the same time, it thrust itself into the warm embrace of the ESG (environmental, social, and governance) movement.

The world’s largest mutual fund manager, BlackRock (NYSE: BLK), uses ESG scores to prioritize stocks to buy. So do many pension funds and other institutional investors.

At the moment, Volkswagen has an ESG score of 41. That is the worst score assigned to the 72 global automakers that are rated by Sustainalytics.

A score above 40 is classified as “Severe”, thereby making its stock ineligible for inclusion in many institutional portfolios. I expect that Volkswagen’s ESG score will drop in half by the end of this year (lower is better). That would rank it in the top quartile of all automakers.

The global car market is likely to undergo an intense consolidation phase over the remainder of this decade. It will be interesting to see how many other automakers follow Volkswagen’s lead in fully committing to EVs.

Even the poster child for everything that is wrong with the U.S. automobile industry, General Motors (NYSE: GM), is feeling the love. Four months ago, GM announced that it will launch 30 new EV products over the next five years. Since then, GM has doubled in value and is trading at its highest price since emerging from bankruptcy 10 years ago.

And last month, Ford (NYSE: F) said that its European division will be 100% EV by 2026. Last week, Ford traded at its highest price in nearly five years.

Ford suspended its dividend a year ago so that it could invest in future growth. At the time, Ford indicated it would restore the dividend once it was on firmer financial footing. Now, the company may be rethinking that decision.

Tesla does not pay a dividend, nor does Nio. Automakers are now tech stocks and are being judged by a new set of rules. Investors don’t care about dividends, but they care a lot about how big of a share of the EV market an automaker will capture.

The big loser in all of this could be Tesla. Five years from now, it may be an also-ran in the global EV market if Volkswagen and the big three U.S. automakers make good on their promises.