He still runs it today. He also owns the Carolina Panthers NFL team.

Tepper knows how to find value. And he’s a billionaire as a result.

My favorite example is the “Tepper Rally” he started on CNBC in September 2010.

He simply pointed out the fact that the Federal Reserve’s quantitative easing was good for stocks. (Sounds simple now, right?)

His fund had normally focused on bonds. But he told the anchors that day: “What, I’m going to say: ‘No, Fed, I disagree with you, I don’t want to be long equities’? … We’re a bond place, but we changed up to a little bit more equities recently.”

Old dogs can learn new tricks. We should all try to follow Tepper in that respect.

When the facts change, strive to change your mind.

I make it a point to follow what he does. And today, he’s investing in one hated group of stocks.

Read on to learn more…

The market has shunned commodity stocks since then. Today, the value of GSCI is less than 5% of the S&P 500. 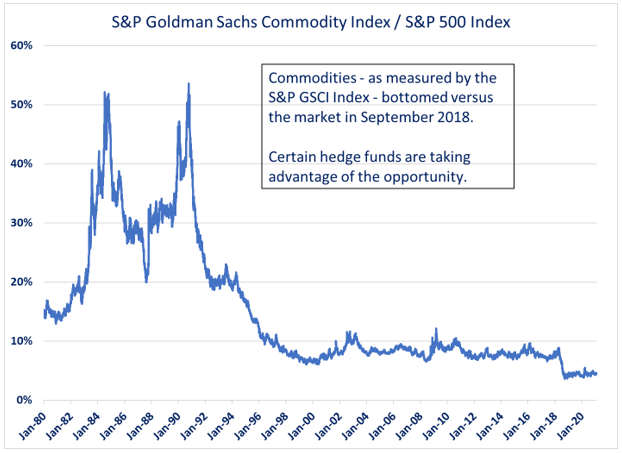 This chart shows the GSCI divided by the S&P 500. The lower it is, the more hated commodites are relative to the broader market.

Commodities are making a comeback. That is our opportunity. And David Tepper has already pounced.

Energy comprised 53% of the new positions he took last quarter.

What to Do Now

The lesson here is: Things can get cheap enough.

He didn’t buy energy stocks because he loves carbon or hates the Earth. His focus is on making money.

I suggest you look into shares of energy stocks today. Heaters are running full blast in the U.S. due to this nasty winter weather.

As the world goes back to work, its growth should continue.

You should know that this fund’s top two holdings are Exxon Mobil Corp. (NYSE: XOM) and Chevron Corp. (NYSE: CVX).

They make up 44% of the ETF. And they will benefit from a crude oil price above $60 a barrel.

The Real Reason Stocks Should Rally in 2021 [sponsor]

A Wall Street legend whom millions have seen on CNBC and Fox Business News just made a prediction that is sure to stun Wall Street. WARNING: What he says contradicts what you’re hearing from Wall Street and the Main Street media. But if you want to see where he expects real wealth will be made in 2021, it’s important you watch this video right away.