The Great Chicken Sandwich War of 2021 is on! Last week, Burger King announced that it will introduce a new chicken sandwich later this year. The wholly owned subsidiary of Restaurant Brands International (NYSE: QSR) boldly states, “We Won’t Half A** a New Chicken Sandwich.”

Take that, Popeye’s! A few years ago, Popeye’s ignited a stampede on its restaurants after introducing its new chicken sandwich. And since Popeye’s also is a subsidiary of QSR, the two companies may be viewed more as allies in the fast-food war against McDonald’s (NYSE: MCD) than as bitter rivals.

McDonald’s is set to unveil its new take on the chicken sandwich at the end of this week as part of its “Accelerating the Arches” growth strategy. Soon, fast-food consumers will have several gourmet chicken sandwiches to feast upon.

That’s great news if you are not vegan, but what does that mean for shareholders of the two companies? Will sales of the new sandwiches simply replace sales of their other products, or will they bring new diners into their restaurants?

Either way, the restaurants stand to benefit. The wholesale price of beef has doubled over the past 30 months. Over the same span, the price of chicken has dropped by a third. 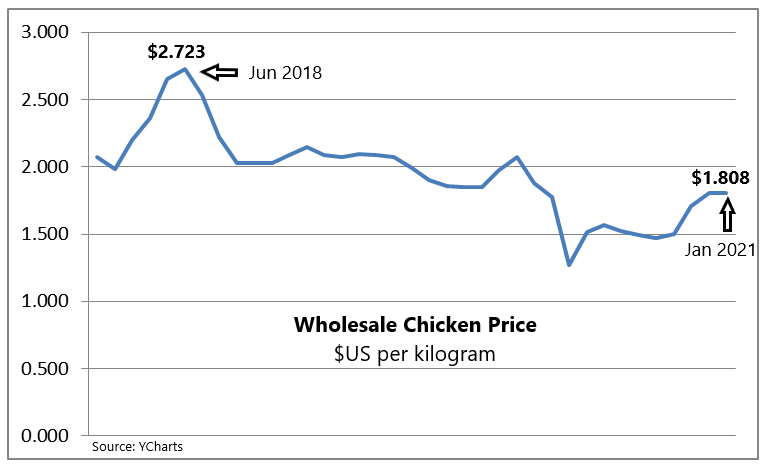 Even if overall sales are flat, profit margins should expand as consumers replace beef with chicken. Already, most chains now offer a non-meat alternative to beef. But those sandwiches are more expensive, driving away budget-conscious consumers. Hence, the pivot towards much cheaper chicken.

All the excitement over the new sandwiches from Burger King and McDonald’s may explain the 6% drop in Wendy’s (NSDQ: WEN) over the past month. Four months ago, the company introduced its new take on the chicken sandwich. Wendy’s is currently offering two chicken sandwiches for $5 to entice diners from trying its rivals’ new offerings.

There is a lot of market share up for grabs. The coronavirus pandemic has forced consumers out of full-service restaurants. As a result, many of them have turned to the drive-thru window at fast-food restaurants as a relatively cheap and easy way to have someone else do the cooking.

The proof is in the numbers. Three weeks ago, McDonald’s reported a 5.5% increase in U.S. same-store sales during the fourth quarter of 2020 compared to the prior year. However, sales and earnings came in below expectations due to severe COVID-19 dining restrictions overseas.

In two weeks, Wendy’s will release its Q4 results. If its recent share price behavior is any indication, it appears Wall Street does not believe those numbers will be any better. The problem isn’t that fast food restaurants are performing poorly. It’s that given the circumstances, they should be performing better than they are.

The reality is that the fast-food industry needs to do something to attract investor attention. Over the past six months, share prices for all of the stocks cited above have been flat while the S&P 500 Index has surged 17% higher.

Put a Fork in It

The concern isn’t affordability. There is a lot of pent-up demand for full-service dining. Americans saved money at twice the normal rate during the second half of last year so they can afford it.

The problem is that demand for traditional fast-food has a lower price ceiling than for almost all other forms of dining. Rather than attempt to raise that ceiling by upgrading their restaurant facilities while full-service restaurants sit idled, they are lowering the floor by transitioning to chicken as their primary sandwich meat. The fear on Wall Street is that once the pandemic is over, diners will flock back to their favorite restaurants.

At the same time, there is growing social pressure to raise the minimum wage in the United States. Although a jump from $7.25 to $15 an hour is unlikely, an increase of several dollars an hour is politically feasible. The fast-food industry relies heavily on low-cost labor to maintain healthy profit margins. If labor costs go up, the only place to offset that financial outflow is by reducing food costs.

Transitioning to a cheaper type of meat will help reduce costs in the short run. However, competition will eventually result in those cost savings dissipating as the fast-food chains battle for market share.

For all those reasons, the fast-food industry faces an uphill battle this year. Don’t let all the clucking over their new chicken sandwiches fool you.