Why Commodities Are Poised to Outperform

When multiple proven investors start saying the same thing independent of each other, I start paying attention…

What I’ve been hearing lately is that commodities are ready to outperform.

Commodities guru Jeff Currie recently said that he believed the world is entering a “long-lasting bull market” for commodities.

Currie is no permabull on commodities.

But he cites three points…

Currie told a Financial Times audience that “every single commodity market with the exception of wheat is in a deficit today.”

That means the bull market is already here.

It also means that investors can make a widely diversified investment across the entire commodities spectrum and not have to bet on one specific commodity.

And diversification is always good…

One of the Greatest Investors Ever Is Also Bullish on Commodities

Currie is joined on his bullish commodities call by Stanley Druckenmiller.

Druckenmiller is an absolute legend.

Over a 30-year period, his hedge fund generated an annualized rate of return of 30%.

But the Druckenmiller track record gets even more impressive…

Over that entire 30-year stretch of managing money, he did not have a single down year!

That isn’t just good – that is an otherworldly investment performance.

Druckenmiller was recently asked how his portfolio was currently positioned.

With all three of these positions, Druckenmiller is betting big on inflation and is poised to profit from rising interest rates and rising commodities prices.

And remember, my colleague Chief Income Strategist Marc Lichtenfeld has been calling for higher inflation and interest rates as well. Back in August 2020, he wrote…

Inflation isn’t on many people’s radar. But it should be… The federal government printed more money in June than it did in the first 203 years of this country’s existence… All that money sloshing around is inflationary.

Given these investors’ track records, I wouldn’t bet against them…

The Last Commodity Call We Investigated

In November, I wrote about how another great investor thought the oil and gas sector was then a once-in-a-lifetime investment opportunity.

The investor was Murray Stahl of Horizon Kinetics Asset Management, and he believed oil prices were headed higher… and not by a little.

In Stahl’s opinion, we were heading toward an oil price spike caused by massive underspending by oil and gas producers.

Since I wrote about Stahl in early November, the Energy Select Sector SPDR Fund (NYSE: XLE) has roared higher. 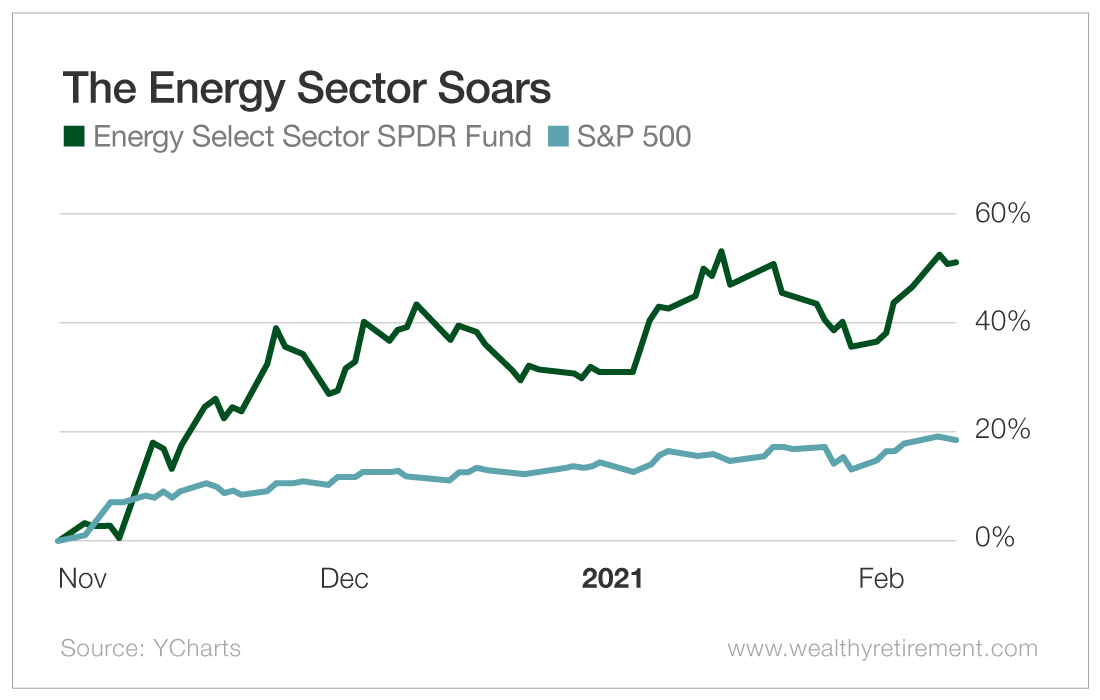 These energy stocks are up almost 53%, far outpacing the overall market.

Driving that 53% increase in the exchange-traded fund is a 50% rise in oil prices, from $40 per barrel in November to more than $60 today.

If Marc, Stahl, Currie and Druckenmiller are correct, this isn’t the end of outperformance for the energy sector.

It is just the beginning…

Stay on the lookout for ways to profit from the commodity bull run that these investors believe has arrived.

This chart shows that Washington will be virtually helpless when the next crisis hits. That's why it could do something drastic on March 17, 2021... something that could bring this market to a sudden stop.