Bitcoin or Gold: Which Should You Buy?

Today, I have a warning for you. It’s something I would like to hear if I was in your shoes

There is an argument going around the investing world that you shouldn’t fall for.

If you do, it could cost you money.

I’ve seen a lot of writings that opine on which is better: bitcoin or gold. The author normally chooses one over the other.

My friends, that is wrong. Please don’t fall for it.

You see, there’s no reason to own one or the other.

These are two separate assets.

Gold is gold. It’s “the money of kings.” It always has been and always will be.

Gold has preserved its value over time.

An ounce of gold bought 350 loaves of bread in 6th century B.C. That was during the reign of King Nebuchadnezzar of Babylon.

Today, it still does. It buys even more than that where I shop.

That means gold has preserved wealth — and appreciated — for centuries. That’s why it deserves a place in your portfolio.

Bitcoin is new compared to gold. It and the blockchain on which it resides are real and useful.

But, come on. If you want to convince more people to buy bitcoin, why would you try to get them to trade out of their gold?

Hardly anyone owns gold. It makes up only one-half of 1% of global financial assets.

That’s like trying to achieve 10th place in a beauty contest. It isn’t where most people want to end up.

Instead, people should be asking themselves if they want to own either of these two investments or the U.S. dollar: 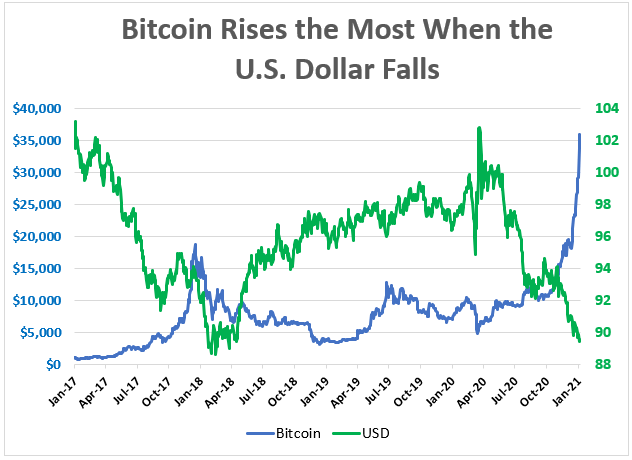 Bitcoin’s major moves, for example, have occurred opposite the dollar over the past four years. You can see them in this chart.

The major down moves in the dollar coincided with a rise in the price of bitcoin.

When this happened in 2017, the price of bitcoin hit its then-high of $19,000. Gold came close to its three-year high back then too.

The U.S. dollar is in a multimonth decline right now.

If history holds up, we should see continued strength in each of these assets.

Today, bitcoin is at an all-time high. Gold traded to within $100 of its high on Wednesday.

Why This Is Important

Federal Reserve Chairman Jerome Powell has stated that his group plans to keep interest rates low through at least the year 2023.

Goldman Sachs has even said rates may not rise until early 2025!

The dollar should remain weak until the market finds a reason to expect rates to rise. We’re not there yet.

That should lead to even more gains for bitcoin and for gold.

Since the stock market bottomed in March, gold prices have risen as much as $600 an ounce, while the price of one bitcoin has soared by $30,000.

No doubt, bitcoin has outperformed. It’s had quite a run. So much so that it wouldn’t be surprising to see it take a break.

But both assets are performing against the weaker dollar. They’re doing what they’re supposed to do. Both assets deserve your attention.

And you should consider investing in both.

Again … if someone asks the question: “Bitcoin or gold?” The answer is, undoubtedly…

How to Tap Into the Most Powerful Income Stream in America... [sponsor]

Each month, America’s most powerful investment is set to pay out around $4.7 billion on average. According to Kiplinger, it can “provide a steady stream of retirement income that will last a lifetime.” If you’d like to see what all the fuss is about … and snag your share of the $4.7 billion payout as soon as next month click here for the full story.