How to RIG the Game in Your Favor

My father had a penchant for penny stocks. He was frugal by nature and loved to hunt for bargains. Unfortunately, none of his high-flying stock ideas ever panned out. Below, I’ll share a low-price stock idea with you that could pay off big later this year.

I did not inherit that trait from my dad. I am only interested in the potential return on investment, regardless of cost. And now that most brokers will execute orders for partial shares of stock, the price really doesn’t matter.

I was reminded of my father when I noticed the recent surge in Transocean Ltd. (NYSE: RIG). Since bottoming out at 65 cents on October 30, RIG soared to $2.70 by December 11. That’s a gain of more than 300% in just six weeks! 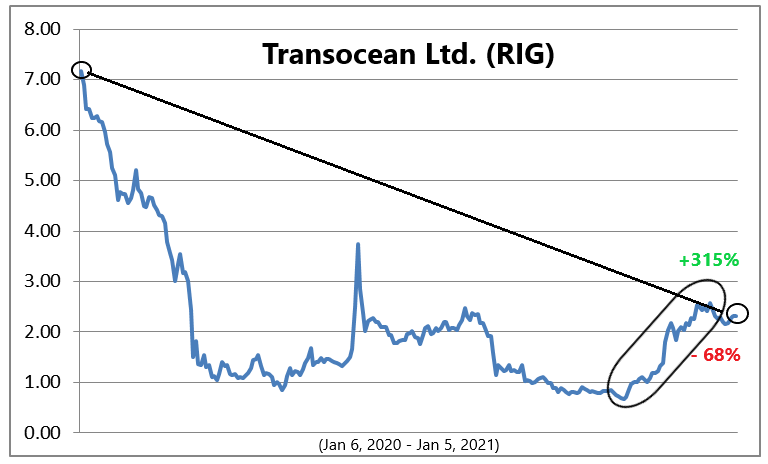 That’s the good news. The bad news is that despite its recent rally, RIG is still down 68% for the past year. Depending on when you bought RIG, you either love it or hate it.

Transocean is an offshore oil driller. The company specializes in operating deepwater rigs in some of the harshest conditions on the planet such as the North Sea.

As you might imagine, it’s more expensive to operate in those environments. For that reason, Transocean has not been profitable for several years.

Until two months ago, the assumption was that the business was destined to go bankrupt. Its working capital has steadily decreased while total debt has increased.

But if Transocean can avoid bankruptcy, it could rebound strongly this year. Short interest in the stock is around 20%. If the short sellers have to buy RIG to cut their losses, it could shoot higher.

If you want to know what a “short squeeze” looks like, consider Luckin Coffee (OTC: LKNCY). A year ago, Luckin plunged from $50 to $4 after an accounting scandal rocked the company. Short sellers piled on, driving LKNCY below $2 by June.

At that time, it appeared that Luckin would eventually be driven into bankruptcy. In July, the company hired a liquidator to negotiate a financial settlement with its creditors. The vultures were circling.

Somehow, the company survived. Take a look at the stock chart below and compare it to the one above. Look familiar? Once again, depending on when you bought Luckin, you are either very happy are extremely disappointed. 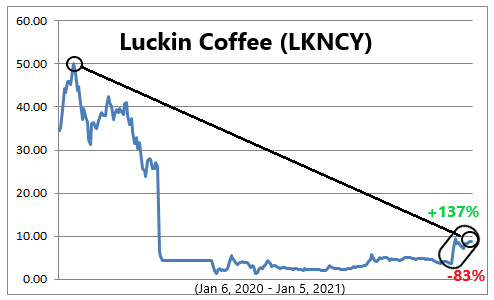 I wrote about Luckin last May when its share price was below $3. I did not think that the company would make it through the crisis intact. However, I thought its stock still held potential value.

My thesis was that a competitor might buy the company to acquire the leases to its more than 6,000 store locations throughout China. In particular, I wondered if Dunkin’ Brands (NSDQ: DNKN) might acquire Luckin to better compete with Starbucks (NSDQ: SBUX) and McDonald’s (NYSE: MCD).

That hasn’t happened. But now that Luckin’s legal problems appear to be over it may be back in play. Last month, the company reached a $180 million settlement with the U.S. Securities and Exchange Commission regarding its illicit accounting practices.

The next day, Luckin announced that its liquidator was able to negotiate a financial settlement with its creditors that has been approved by the court. Over those two days, LKNCY more than doubled in value.

I don’t recommend trying to guess which company will be the next one to avoid bankruptcy. More often than not, they end up running out of options and then going out of business.

Instead, I suggest you consider the iShares Fallen Angels USD Bond ETF (FALN). This fund owns bonds issued by companies considered to be in serious financial trouble.

The top holding of the fund is a bond issued by Carnival (NYSE: CCL). Two months ago, I discussed Carnival’s decision to swap stock for more debt.

The cruise ship industry is in trouble. The longer it takes to get COVID-19 under control, the greater the chances that Carnival may have to declare bankruptcy.

If that happens, Carnival’s shareholders may end up with worthless stock. However, its debt is collateralized by ships that can be sold to pay off the bonds.

In terms of sectors, the fund’s biggest issuers are energy companies. The energy sector has taken a beating during the past year, as evidenced by RIG’s abysmal performance noted above.

So far, the fund’s strategy appears to be working. It pays a dividend yield of 5.1% while its share price has gained 8% over the past year.