1 Chart Shows Why Gold Is Rallying (Hint: It's Not Inflation)

The numbers are absolutely staggering.

Across the globe, governments have unleashed $17 trillion of fiscal and monetary stimulus in response to the pandemic. That figure is just shy of the output of the entire U.S. economy.

And that’s just so far. It looks like more is on the way.

U.S. lawmakers are in talks to add $1 to $3 trillion to that number, and the European Union just reached a deal on a $2 trillion recovery plan.

These gargantuan sums have stoked fears that a period of hyperinflation is just around the corner.

Along with these fears, gold prices have surged. Year to date, gold’s 25% return is outpacing even the Nasdaq Composite Index.

So, the conventional wisdom tells us, inflation fears are driving a massive rally into gold.

There’s just one problem with that theory. As Ted wrote here in June, there is absolutely no inflation in the economy … at least not outside of financial markets.

That’s why the stock market has soared while jobless claims remain stubbornly high.

And inflation is expected to remain subdued. The markets are only pricing in annual inflation of 1.4% for the next five years. That’s even below this past decade’s meager average.

My point is this: Inflation is not the reason the price of gold is near all-time highs.

There’s another story behind why gold has jumped recently.

And it’s also why the gold rally might just be getting started.

If there was inflation, gold would be attractive as a store of value. It’s easy to create trillions in additional money. However, it’s hard to remove enough gold from the ground to significantly boost the supply.

But gold has another role. It’s also used as a safe haven asset, and right now it holds the pole position among other safe havens. This is why prices have rallied recently.

And Treasuries have a key advantage over gold: they pay an interest rate, whereas gold does not.

So when Treasury yields are relatively high and inflation is low, gold loses some luster.

But when Treasury yields are low, that advantage fades away. Especially in times like now, where the 10-year U.S. Treasury only yields 0.58%.

There’s also the fact that $15 trillion in global government debt sports a negative interest rate. You actually receive less than your initial investment if held to maturity. That’s yet another reason to choose gold as a safe haven in this environment.

And that’s why inflation coupled with interest rates is the most important factor in the direction of gold prices. Check out the chart below to see what I mean: 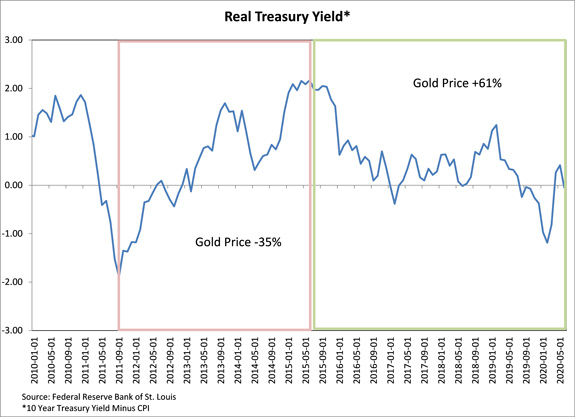 The blue line is the real yield — the interest rate on a 10-year treasury minus inflation.

The bulk of those gains have come since the beginning of 2019, when interest rates initially began their nosedive.

And for the foreseeable future, yields aren’t going anywhere — certainly not higher.

The Federal Reserve expects to keep short-term rates at zero through 2022 while continuing to purchase $120 billion of government debt every month to keep long rates low.

So keep close watch of real yields. Despite gold’s impressive rally this year, we may only be in the early stages as long as the competition doesn’t show up.

Have you heard about the little-known way you could be rewarded for retiring early?

It’s buried so deep amid the mountains of publicly available benefits information, most people are unaware it even exists.

And yet it could give you an extra $54,072 for retiring at 62 instead of waiting until you’re 70. Click here now for more details.