Last week, I was cruising down Florida’s Interstate 95, which I like to call the “American autobahn” because driving on it is like a free-for-all.

In the left lane, there was a Ferrari 458 zooming by at 100 miles per hour en route to Miami. In the right lane, someone’s grandmother was in a Lincoln Continental driving 20 miles below the speed limit.

The other day, I noticed an 18-wheeler approaching in my driver’s sideview mirror. Like most people, when I see one of these big rigs approaching, I move to the opposite side of the lane and give them room to pass.

Now imagine a scenario when an 18-wheeler passes, and you look up to see there’s no one driving.

Get ready for it. Self-driving trucks are likely to be a reality in the next few years. The convergence of Big Data, artificial intelligence and 5G is making our dreams of the future a reality.

How Self-Driving Trucks Will Contribute to America’s Reset

Self-driving trucks may even arrive before autonomous cars because highway driving is less complex than navigating neighborhoods.

Intelligent big rigs will play a role in America’s economic boom in the next decade.

You see, trucking is the lifeblood of the U.S. economy. Over 65% of the food we consume and the goods we buy spend some time on a truck before it arrives in our home.

When these items can travel in a more affordable and efficient manner, not only will they be cheaper, but companies’ profit margins will also increase.

Currently, it costs $1.82 per mile to truck goods to the market. But consulting giant McKinsey sees a 45% drop in operating costs with full autonomy. That means trucking costs could drop to $1 a mile, or even less.

This would create a cost savings of $85 billion to $125 billion a year in the U.S. for-hire trucking industry. It will open up new markets for local companies that can now move goods for less money. This will create a more competitive landscape, the necessary backdrop of productivity.

McKinsey expects this to happen in four waves. Each wave will lower the operator’s total cost of ownership. This will happen slowly at first, but then rapidly by 2027: 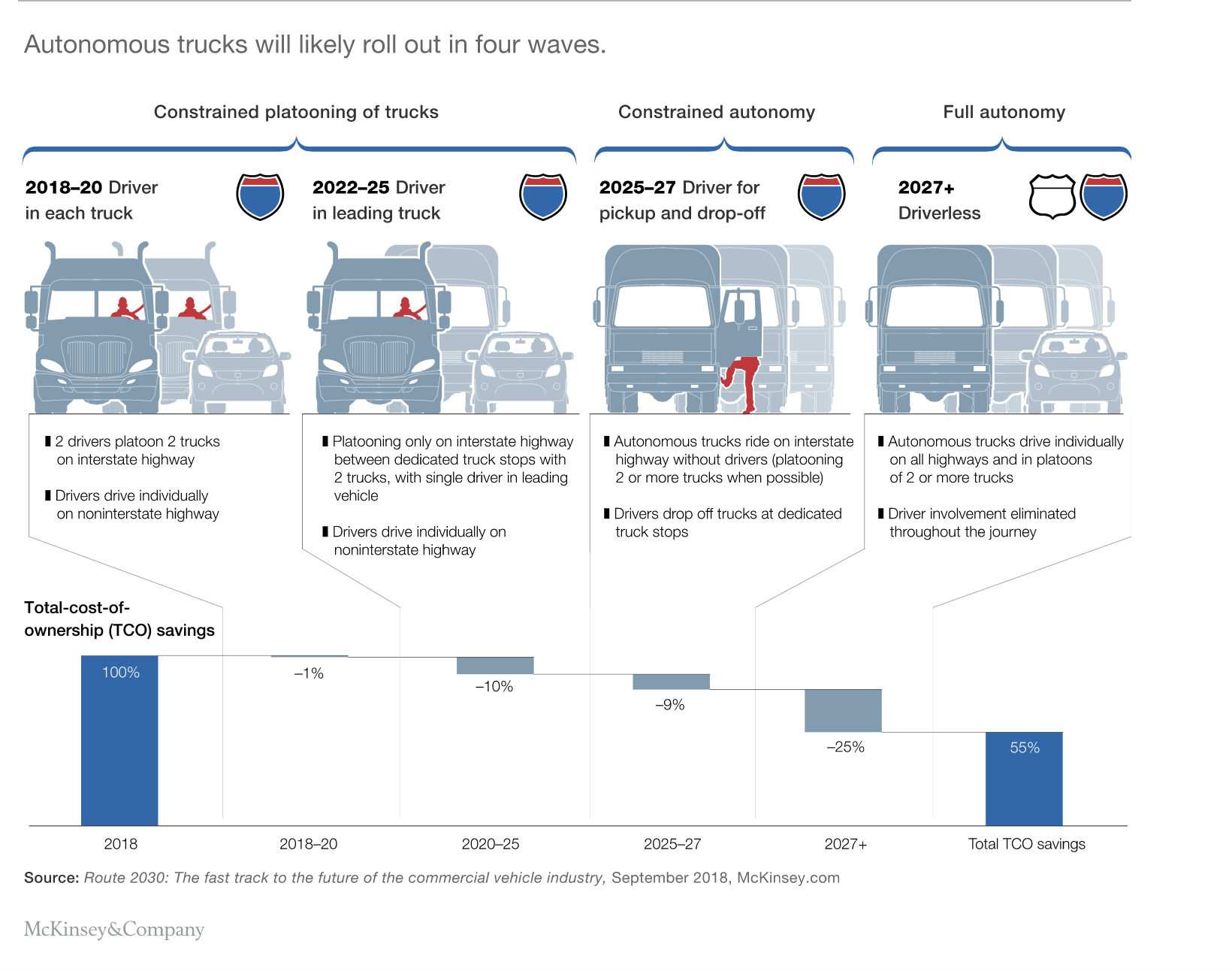 That means autonomous trucks could be everywhere by the end of this decade. This is a trend you don’t want to miss.

So, here are the top companies to watch in the self-driving truck space.

Owned by Alphabet Inc. (Nasdaq: GOOGL), the parent company of Google, Waymo is best known for its autonomous cars. If you’re in Phoenix, Arizona, you might see Waymo vehicles on the street shuttling passengers without a safety driver.

The company’s self-driving technology, called the Waymo Driver, is now being installed in semitrucks. Earlier this year, Waymo announced that it’s starting to test routes in Texas and New Mexico, by mapping the routes using their Chrysler Pacifica minivans.

Waymo believes that its software can learn to drive a big rig similar to how a human driver would after years of driving passenger cars. It noted that: “The principles are the same, but things like braking, turning and blind spots are different with a fully-loaded truck and trailer.”

Daimler AG ADR (OTC: DMLRY), the parent company of Mercedes-Benz, has been developing a self-driving truck for over six years. The project, called the Mercedes-Benz Future Truck 2025, uses a system known as Highway Pilot to drive on highways without human help.

In 2019, Daimler committed more than $570 million to create level four driverless systems. It added more than 200 jobs within the company in a push to offer trucks with “highly automated driving” within a decade. While Daimler is a world-renowned automotive manufacturer, they may be slipping in the race as they haven’t updated progress in 2020.

While it hasn’t received as much fanfare as Elon Musk’s Model 3 or Cybertruck, Tesla Inc. (Nasdaq: TSLA) rolled out an electric big rig in 2017. The project has since been delayed until 2021.

The plan is to sell these electric rigs with Tesla’s self-driving autopilot software as standard. Musk also noted that its trucks could come with specific features like a system that prevents jackknifing.

Tesla plans to install a platooning feature, where a lead truck is controlled fully by a human driver, closely followed by a parade of self-driving trucks. This would cut down wind resistance and increase the distance Tesla trucks could travel before they need to be charged.

This private company is a dark horse in the self-driving truck race. Earlier this month, the San Diego-based startup announced the world’s first “autonomous freight network.”

The company is expanding existing shipments with UPS (also an investor) and food service delivery giant McLane. That brings their total to 22 contracted customers, who will have influence over which routes are digitally mapped out for self-driving trucks.

In a recent interview, TuSimple’s President Cheng Lu compared this scenario with the 19th-century railroad expansion: “Imagine if you could influence, back in the day, where a railroad track was being built, and you could build that railroad track right to your front door. As a shipper, wouldn’t that give you a big advantage?”

TuSimple isn’t public yet, but it commands a $1 billion private market valuation. With the recent surges in alternative fuel truck stocks like Workhorse Group Inc. (WKHS) and Nikola Corp. (NKLA), investors should be paying attention to its inevitable listing.