Bitcoin is back in the news.

This week, the world’s largest cryptocurrency went through its halving cycle.

In this process, the payments crypto miners receive for securing the underlying blockchain get cut in half.

A week ago, miners were getting 12.5 BTC for every new block added to the chain. After the halving, the payout is only 6.25 BTC.

It’s as if a gold mine suddenly yielded half the amount of the gilded metal for the same amount of work.

The halving cycle has piqued interest in “digital gold” like we haven’t seen in a few years.

After all, increased scarcity tends to attract investors. The previous halving in 2012 and 2016 precipitated massive rallies in bitcoin.

Last month, Barron’s mentioned the halving in its weekly editorial.

Google searches for “buy bitcoin” are the highest they’ve been in over a year.

And Wall Street research firm Jeffries even went so far as to tell clients to go ahead and buy ahead of the halving.

Since January, bitcoin is up around 40%, outpacing every major asset class.

It’s not just bitcoin, though.

Other crypto assets have climbed as well. The total market cap has risen 37% this year to $261 billion.

There’s clearly an opportunity here. But investing in crypto can be tricky.

Even though popular online brokerages such as E*Trade and Robinhood are now allowing investors to buy a few cryptocurrencies, there are still limitations to putting them in retirement accounts.

Plus, they’ve only listed a few of the 2,000-plus tradable cryptos.
<sp
Today, I’m going to go over the three exchange-traded notes (ETNs) that provide exposure to the crypto markets … and why you shouldn’t buy them.

A New Way to Own Cryptocurrencies

For years, bitcoin enthusiasts have tried to list exchange-traded funds (ETFs) on major stock exchanges. So far, the U.S. Securities and Exchange Commission has prevented this.

However, there are exchange-traded notes that track the price of bitcoin, Ethereum and Ethereum Classic.

ETNs are listed on major stock exchanges and trade like stocks.

In the crypto ETN world, there are significant premiums to the underlying cryptocurrency, or net asset value (NAV). That means the underlying value could increase, but your ETN could decrease as the spread narrows.

The largest ETN provider is Grayscale, which offers an assortment of single-asset and diversified ETNs.

Here are its three biggest ETNs, and why you should avoid them.

Grayscale’s largest product is its Bitcoin Trust (OTC: GBTC), an ETN that tracks the price of bitcoin. Grayscale charges a 2% annual fee and manages over $3 billion in assets.

Imagine paying a 20% brokerage fee to own shares of Apple.

Historically, this is cheaper than GBTC’s 39.9% average premium to NAV but is still a significant premium to the underlying asset.

GBTC Is Cheaper Than Average … but It’s Still Expensive 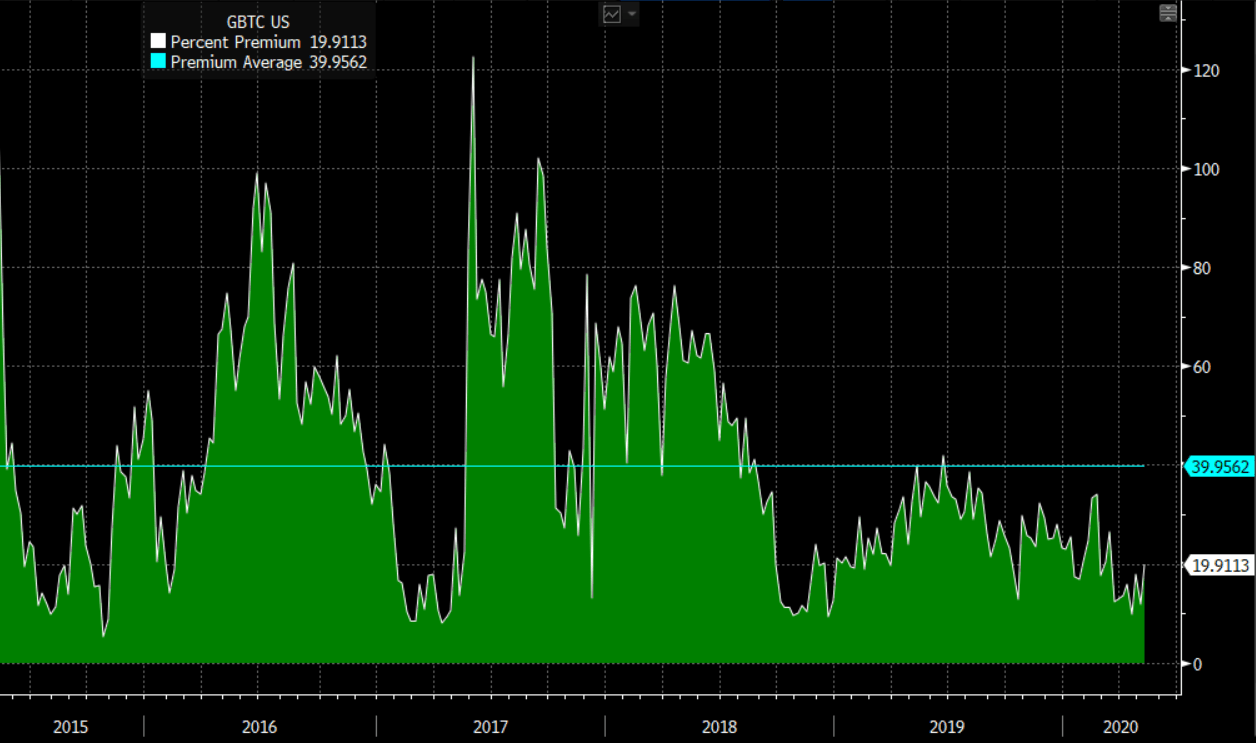 The second-largest ETN is the Grayscale Ethereum Trust (OTC: ETHE), which tracks Ethereum.

Investors in ETHE are paying a significant premium for the underlying Ethereum.

That’s a 494% premium to NAV. This is significantly higher than the 224% average premium. 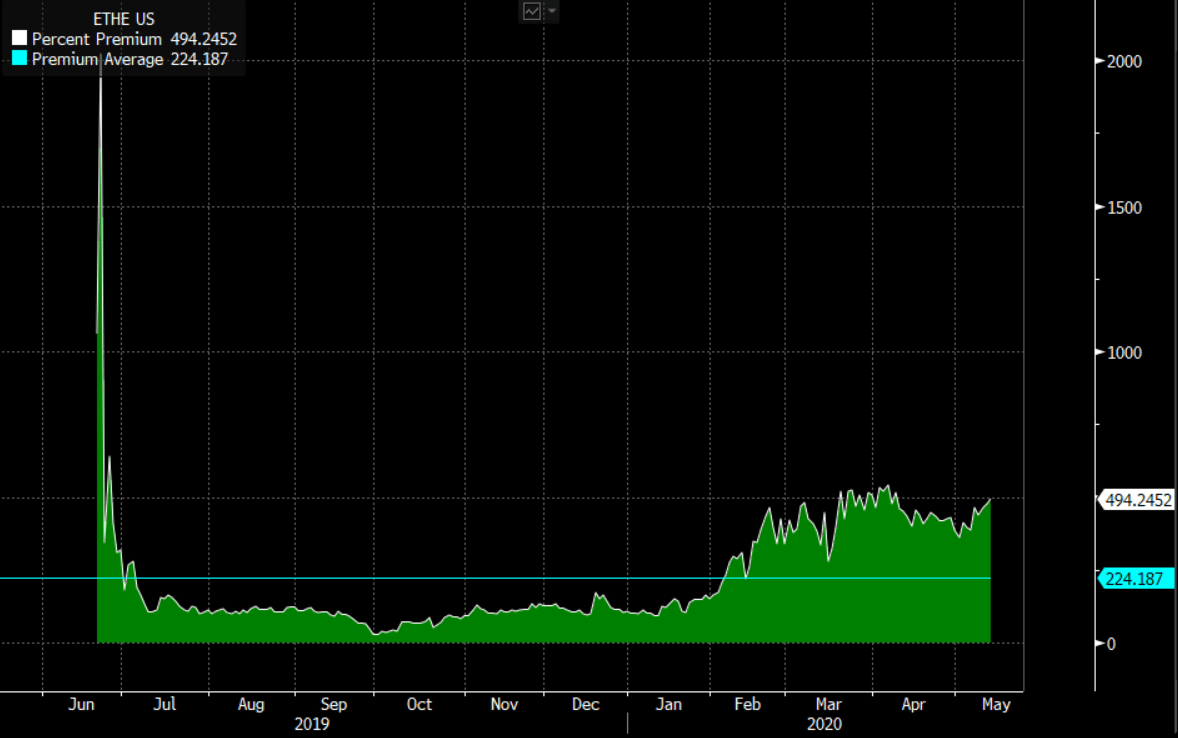 Each share of ETCG is worth 0.912 shares of Ethereum Classic. ETCG holds $65 million in assets and charges a 3% annual fee.

Again, investors in ETCG are paying a significant premium to the underlying Ethereum Classic.

ETCG Investors Are Paying a 179% Premium 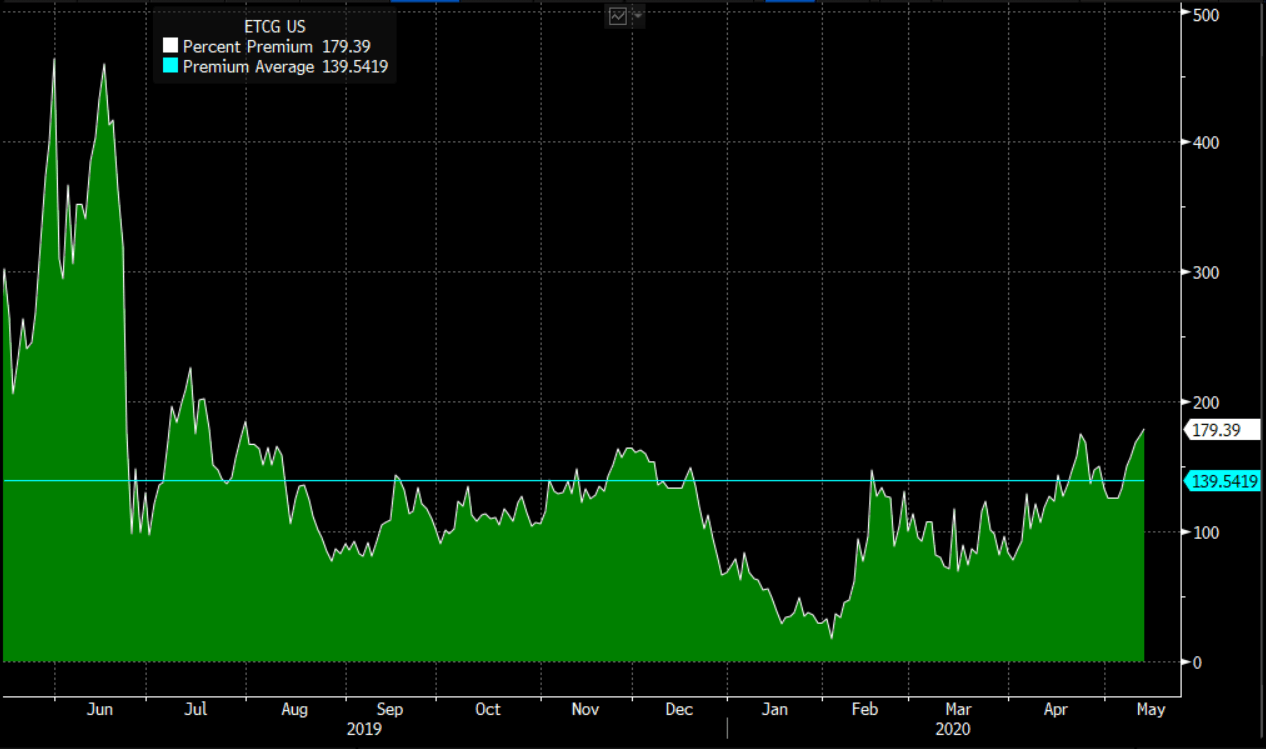 If you want exposure to the crypto markets, buy the real thing on Coinbase, E*Trade or Robinhood.

You’ll see how easy it is to transfer your digital money from one platform to another.

It only takes a few steps to copy and paste wallet addresses to move digital assets anywhere in the world.

And you won’t have to pay a fee for the ownership.

Scientists have found a way to transform ordinary sand into glowing grains of what we call “fluorescent sand.” Experts are saying it’ll ignite “the Fourth Industrial Revolution” and $12 trillion in revenue could be generated.

See how to stake your claim by going here now.