The stock market has been on a run for a while now.

But the run isn’t over. Money on the sidelines continues to grow.

This measure peaked above $3.8 trillion in March 2009 … just before the stock market began moving higher.

The funds’ current balance is the highest it has been since then.

That’s why I recommend you consider an easy, one-click investment that beats the market…

The Power of Dividends

Dividend reinvestment is when you use the dividends you receive to buy more shares. 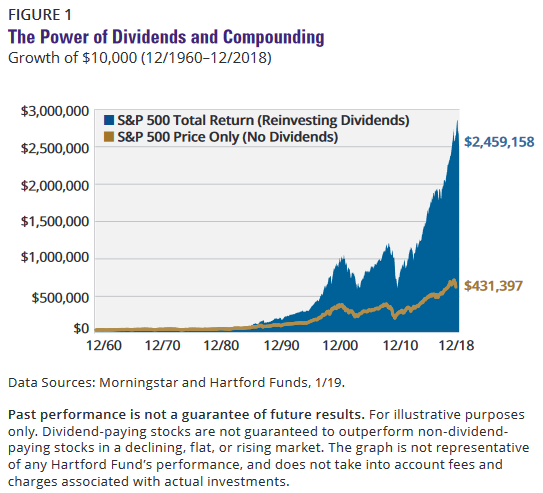 This means it makes sense to consider firms with a solid dividend history.

Dividend Stocks Can Be Very Lucrative

For those who are worried about a market drop, dividend stocks can serve as insurance. If the market drops, dividends will cushion the fall.

In the decade of the 2000s, stocks fell almost 1% per year on average. However, investors earned 1.8% from dividends. The drop would have been closer to 3% without them.

More importantly, though, investing in companies that grow their dividends the fastest can be very lucrative.

One exchange-traded fund (ETF) has proved this.

The iShares Core Dividend Growth ETF (NYSE: DGRO) has been public since June 2014. It buys U.S. stocks that grow their dividends year after year.

From its start to January 9 of this year, its total return is nearly 7% better than the S&P 500.

The biggest reason for the outperformance is its dividend.

Reinvesting Dividends Is Quick and Easy

You can reinvest your DGRO dividends through your broker.

You can call them to set it up. Or you may be able to do it online.

That will take you to a screen that allows you to select which securities you would like to reinvest your dividends into.

And it’s cheap. Its expense ratio is only 0.08%. That means the fund’s operating costs will have a minimal impact on your investment.

This new tech company is on track to dominate both broadband and 5G wireless across an entire continent. However, due to an unusual situation, few outside of Wall Street are even aware this stock exists. Those who know about it and act now could reap a fortune. Click here for details.


1 Safe Bet for 26% Gains
Update: Big 3 Rebound!
Cheap Lithium-Ion Batteries Unlock Massive Tech Gains
Will Airline Prices Lift Off Again in 2020?
Big News Will Boost Stock by Summer
The Corona Babies Are Coming
A Creative Way to Play Hypervolatility
Is This 24% Dividend (Paid Monthly!) Too Good to Be True?
How Investors Rationalize Their Fears... and Lose Money
Where to Find Value Today