Invest Before This Tech Changes Everything

A few weeks ago, my friend and Banyan Hill colleague Ian King related a recent episode from his life.

He was stuck on a flight where the crew insisted all devices be shut off for the duration. They were worried about radio interference from passengers’ onboard devices.

As Ian noted, a brand-new technology I’m calling the Hypernet would have allowed the crew to sidestep those fears — and let him stay up to date on the progress of his beloved New York Yankees’ playoff hopes.

Well Ian, the wait is over.

The Hypernet, which uses light waves instead of radio for data communication, just had its first trial flight.

The lucky passengers in those 12 seats were invited video gamers.

Investors who wait for the technology to go mainstream will be kicking themselves down the road.

3 Reasons the Hypernet Is an Upgrade & Internet Revolution

Hypernet LED technology will be a big deal in aviation. 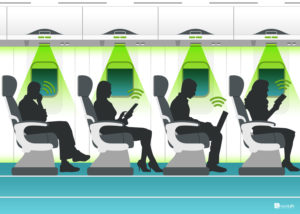 It’s also an important reason why I recently issued a special stock report titled: Hypernet Fortunes: How to Make 10 Times Your Money From the Fastest Technology in History.

One, there’s no possibility of radio interference with the cockpit’s sensitive instruments.

Two, according to a Deloitte report on in-flight connectivity, the weight of a plane’s Wi-Fi-based systems, including cables, costs about $90,000 per aircraft in extra fuel each year.

Most of the big U.S. carriers have 700 or more aircraft. Transitioning its fleet to light-based Hypernet communications in each plane’s cabin allows a carrier to save $60 million or more each year in fuel.

For carriers that ditch their seatback video screens (which add about 2,000 pounds to a plane’s load) and allow passengers to use their own screens for movies and gaming, the savings would be even more.

Three — and this is important — Hypernet LED systems can be made to be highly directional.

So an airline could charge extra for the technology for particular seats. But the passenger who pays for it doesn’t have to worry about a seatmate hitching a free ride on his premium data stream.

The Next Logical Step for Data Communication

Deloitte says revenue from in-flight connectivity hit nearly $1 billion for the airline industry in 2018, while noting “the rising number of routes, higher connection speeds and greater data capacity per flight.”

Considering those trends, Hypernet LED technology is the next logical step.

And I’m not just talking about airlines.

The Hypernet is a game changer for retail stores, factories, hospitals and any other venues where there’s a massive need for secure, ultra fast, reliable data connections.

My subscribers at Total Wealth Insider are already off to a great start with our recent stock pick for this trend.

I’m expecting even more big gains in the years to come as Hypernet technology pushes deeper into our technological lives.

This new tech company is on track to dominate both broadband and 5G wireless across an entire continent. However, due to an unusual situation, few outside of Wall Street are even aware this stock exists. Those who know about it and act now could reap a fortune. Click here for details.