The Market Is Dead Wrong About the Junior Mining Sector

I’m calling it now: This is going to drive the major companies to acquire junior miners with the most promising discoveries.

You see, juniors are the companies building new mines or developing new deposits.

That doesn’t mean that they are worthless. It means they carry more risk.

And that scares investors away. But I see something in the months ahead that the market is ignoring.

Take a look at the chart below: 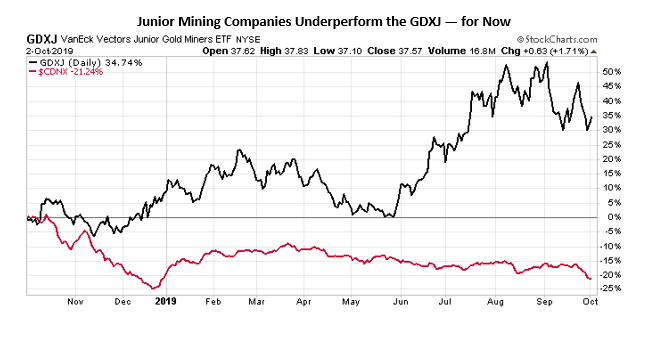 The black line is the VanEck Vectors Junior Gold Miners fund (NYSE: GDXJ). It tracks companies with market values in the billions, including Kinross Gold and Yamana Gold.

The red line is the TSX Venture Exchange. That’s like the Dow Jones Industrial Average for tiny mining companies.

It holds 939 small miners. As you can see, the small miners underperformed the GDXJ by 55%.

This is because investors think companies on the Venture Exchange are riskier.

Almost all the companies in GDXJ produce metal now. The tiny companies listed on the TSX Venture don’t. So, the value of these stocks depends on your view of the future.

The chart above shows us that the market doesn’t think much of the future of mining.

A mine is like a loaf of bread in a sandwich shop. You make so many sandwiches, and then you need a new loaf of bread. The TSX Venture Exchange is the bakery.

These tiny companies are finding the new mines that the companies in the GDXJ need in order to keep producing metal.

Pan American Silver, for example, is a $3.4 billion silver and gold producer.

Pan American partnered with this company to earn a partial interest in the new discovery.

The usual outcome of such a partnership, if there is a successful discovery, is a buyout of the junior partner for a huge gain.

For instance, in 2016, the giant miner Goldcorp acquired junior Kaminak Gold for $520 million. Goldcorp wanted to acquire Kaminak’s Coffee project in the Yukon.

We saw something similar recently.

My point with all these examples is that the junior partners made important discoveries — only to be bought out by larger mining companies.

That’s the kind of market we are in today.

As the gold price rises, this separation will get larger. I expect to see consolidation in the junior mining space as the most promising new discoveries get snapped up while the gap is still large.

An investment research expert just revealed details on a stock that is expected to create America’s next wave of one-stock millionaires. This new tech company is set to dominate 5G wireless across an entire continent. Early investors could see every small stake grow to $1 million. Get more details here.