…But that doesn’t mean it isn’t.

At their core, those words are just legal disclaimers so mutual funds and other investment companies don’t get in trouble for their marketing.

Because we know that things occur repeatedly.

We know that Federal Reserve Chairman Jerome Powell has said the Fed will support the economic expansion. And the Fed’s main way for doing so is with rate cuts.

We’ve seen the effects of anticipated rate cuts. They moved the market 10% higher from June 3 to July 26.

The market currently shows a 100% probability that the Fed will cut rates by at least a quarter point in its September meeting.

And even if the rate cut doesn’t happen in September, there’s another meeting at the end of October.

When the market is falling, you should see it as an opportunity to buy stocks for cheap … then reap the rewards once the Fed steps in.

Lucky for us, some smart investors have provided an indication of some names you may want to look at.

Insiders Are Reaching Into Their Own Pockets

Check out the insider buying at the largest companies: 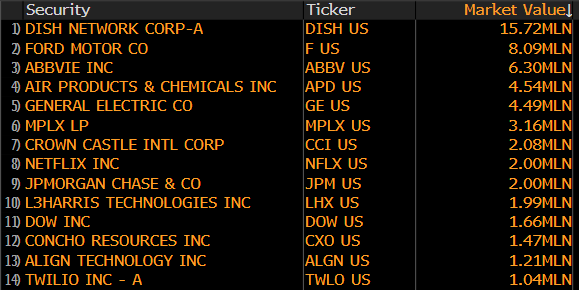 Over the past month, insiders — officers, directors and large owners — of these stocks have reached into their pockets to buy more than $1 million of shares.

For example, rate cuts are adversely affecting the prices of bank stocks. The S&P 500 bank index has fallen 12% since the S&P 500 Index peaked on July 26.

And some believe that’s too far. On August 8, JPMorgan Director Mellody Hobson put $2 million into shares of the largest bank in the country.

That’s significant because Hobson is a well-known investment professional. She is the co-CEO of Ariel Investments, a 36-year-old Chicago investment firm. She knows a thing or two about where to put her money.

In another sector, Ford Executive Chairman Bill Ford believes the company’s stock has fallen too much. This $8 million buy is significant because it’s Ford’s first open-market buy since 2011.

His timing was decent at that time. Shares rose nearly 30% over the next two months.

Following insiders into stocks can be lucrative. The people who are buying have intimate knowledge of the operations of the businesses they are buying.

But if I had to choose one, the pharma stock I think you should look at is a name that didn’t make this list. It scored No. 23 on the list of most insider buys over the past month.

On January 3, Bristol announced it would buy peer Celgene for $74 billion. The market’s reaction was swift: 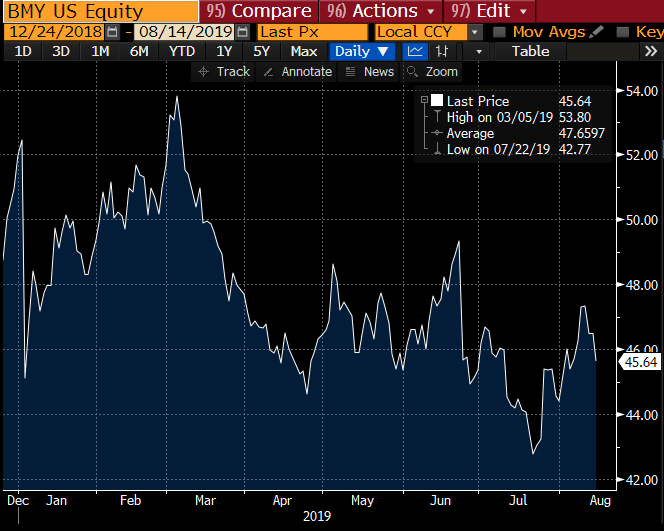 They temporarily exceeded the pre-deal price in early March, but then moved lower through most of July.

Bristol and Celgene are waiting for the regulators to approve their deal.

It should work out either way for Bristol shareholders.

For one, we get to buy in at a discount to its pre-deal price. And the pharma stock pays a 3.5% dividend.

If the deal is denied for some reason, shares will likely rise back above $50 in a second.

The company’s sales rose 10% year over year in the last quarter. That helped it post record adjusted earnings per share in the second quarter.

Plus, as often happens with time, the market seems to be warming to the idea of the combination. As compared to the broader market, Bristol shares bottomed in late July.

At the urging of the U.S. Federal Trade Commission, Bristol will sell one of its drugs — Otezla. And management says it expects the deal to close later this year or in early 2020.

The combined entity would be a cancer-fighting powerhouse. And the companies expect to realize $2.5 billion of cost synergies through the merger.

Deal or not, you should be able to make at least 20% with Bristol-Myers Squibb.

The Stock of the Century — Buy This Stock RIGHT NOW! [sponsor]

What if you could buy one tiny stock today for $10 — at the center of a growing tech industry — that experts believe will explode a massive 77,400%?

Wall Street legend Paul Mampilly recently identified this as the stock of the century.

Buying up a handful of shares of this small company now could change your life and even make you millions.